A group of developing countries, backed by United Nations agencies and activist groups, is pushing to limit patent protections for Covid-19 vaccines being tested by some of the world’s biggest pharmaceutical companies so that inexpensive copies can be produced for poorer nations.

South Africa, Ghana, Senegal, Pakistan and others argue they won’t be able to afford to protect their people without lower-cost, generic alternatives to the vaccines now being tested by companies such as Pfizer Inc., AstraZeneca PLC and Moderna Inc.

That stance puts the countries at odds with the pharmaceutical industry, which says it supports wide distribution of the vaccines but warns that allowing drugs to be copied would undermine innovation and raise the risk of unsafe vaccines.

Albert Bourla, chief executive of Pfizer, has said calls to sidestep patent protections for Covid-19 vaccine are nonsense, and dangerous.

The developing countries’ campaign is part of an intense global race to secure supplies of Covid-19 vaccines. Even before the drugs are fully tested, richer countries have struck deals worth billions of dollars to buy up much of the known manufacturing capacity. 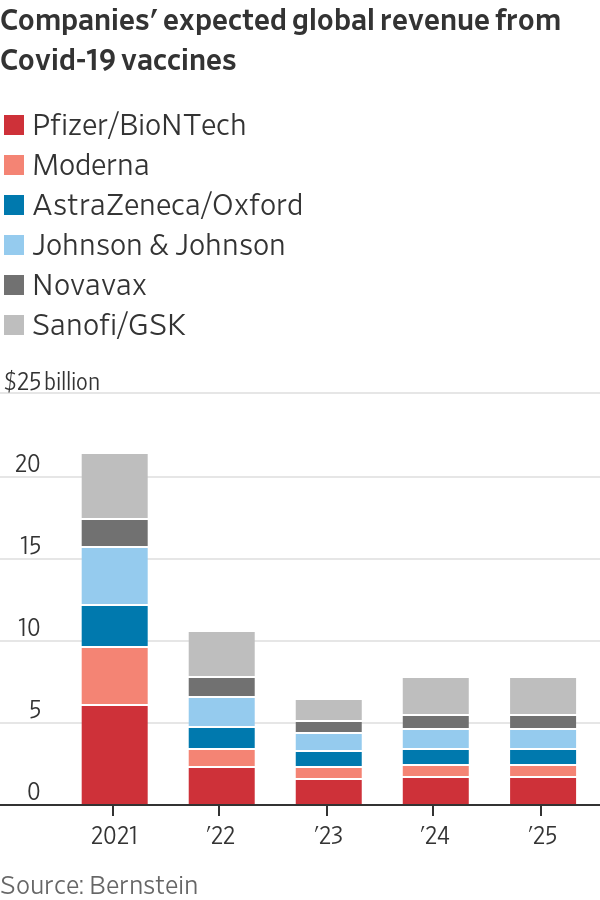 It is an effort that echoes moves in the late 1990s to reduce the price of drugs used to treat AIDS. After years of being criticized, drugmakers allowed inexpensive generic copies of AIDS drugs to be distributed in some countries.

International law permits countries to eliminate patent restrictions in some emergency situations and issue “compulsory licenses” to allow domestic industry to copy a medicine and even export it to other nations in need.

South Africa has already called for the intellectual property barriers for Covid-19 vaccines to be lifted at the World Trade Organization.

At the United Nations General Assembly this month, the World Health Organization plans to set out operational details of a voluntary patents pool where Covid-19 technology can be shared. Companies would be paid a royalty for the use of their vaccine, but one well below what they could earn otherwise.

“We cannot afford to have a monopolistic approach to intellectual property for treatments and vaccines, nor maintain a system which puts profits before the lives of people,” said Winnie Byanyima, executive director of UNAIDS, a U.N. agency set up to combat HIV.

As government and private money pour into the global race for a Covid-19 vaccine, drugmakers are under great pressure to keep the shot affordable while also keeping investors happy. WSJ explains what this means for the final price tag of the jabs. Illustration: Crystal Tai

By comparison, the U.S., Japan, U.K. and the European Union already have placed orders for more vaccine doses than they have people.

Replicating a vaccine is much more difficult than producing a generic version of drug such as Tylenol. Jesse Goodman, a doctor and infectious-disease expert at Georgetown University, said success would likely require drug companies to share their expertise and manufacturing technologies.

“Small variabilities in a protein or something like that could affect its safety or effectiveness,” said Dr. Goodman.

Developing countries have untapped manufacturing resources that could be used, especially with technical help from the big drugmakers, said Jayasree Iyer, executive director of the Access to Medicine Foundation, which campaigns for the pharmaceutical sector to do more for poorer countries.

“There is some manufacturing capacity available in regional manufacturers, especially if you pool that capacity it can be pretty big,” said Ms. Iyer.

In the past, the U.S. and other richer nations with robust pharmaceutical industries have generally sought to protect patents strenuously. In April, the U.S. Trade Representative’s annual report urged countries “to consider ways to address their public health challenges while also maintaining IP systems that promote innovation.” The report acknowledged that in extreme circumstances, nations can override patent protections.

“If you don’t protect IP, then essentially there’s no incentive for anybody to innovate,” Pascal Soriot, chief executive of AstraZeneca, said at a press event earlier this year. Emma Walmsley, chief executive of GlaxoSmithKline PLC, questioned whether patent protections really hamper the ability of developing countries to obtain vaccines.

How can the distribution of a Covid-19 vaccine be done in an equitable manner? Join the conversation below.

Public funds haven’t covered all of the developmental costs for the vaccines, said Tom DiLenge, president of public policy at BIO, a biotechnology trade association based in Washington, which represents several companies developing Covid-19 vaccines.

“If the government could do this on their own, they would,” said Mr. DiLenge. “This is a partnership. You cannot have private entities engage in a partnership if you’re going to take their intellectual property and restrict how they can price and market their products.”

Covid-19 vaccines now in the testing phase will bring sales of over $21 billion to six companies in 2021 alone, estimates Bernstein Research, a finance firm based in New York. Pfizer would lead the pack taking in more than $6 billion, followed by the Sanofi SA partnership with GlaxoSmithKline, Johnson & Johnson, Moderna, AstraZeneca and Novavax Inc., according to the Bernstein tally.

AstraZeneca and Novavax have licensed 1 billion doses each of their vaccines produced for poorer countries by the Serum Institute of India, a private company which is the world’s biggest vaccine producer.

Serum Institute said it doesn’t know who will pay for the manufacture of the doses. No governments or other entities have stepped forward so far, “so it is a matter of great concern,” the company said through a spokesman.

Serum Institute plans to export half of its production to other developing countries, with the rest slated for India, a country with one of the world’s largest populations least able to afford the vaccines.

Get a coronavirus briefing six days a week, and a weekly Health newsletter once the crisis abates: Sign up here.

Some poorer countries are seeking a supply from China, which has four Covid-19 vaccines in final-phase testing. China is testing its vaccine candidates in countries including Pakistan in return for promising to supply significant doses to protect at least some of the most vulnerable.

However, Chinese company Sinopharm has said its vaccine will cost around $145 for a two-dose course. At that price, it would likely be unaffordable for developing countries, and much higher than prices quoted so far for Western vaccine candidates, which have ranged from $4 to $37 per dose.

In 1997, drugmakers, with the support of the U.S. government, sued South Africa for trying to use cheaper generic copies of their drugs to treat its HIV epidemic. The tide eventually turned and the lawsuit was dropped in 2001 by the industry, which conceded it had made mistakes.

“The AIDS situation didn’t begin to get resolved until the political pressures particularly in the United States became so intense that the governments had to deal with it,” said Frederick Abbott, a professor of international law at Florida State University, who advised South Africa in that case.

He predicts: “You’re going to have a situation with the Covid vaccine fairly soon where you are going to have these intense political pressures and governments aren’t going to be able to say to their people that ‘We’re sorry, you can’t get a vaccine because AstraZeneca or Moderna isn’t willing to supply the technology.’”

Write to Saeed Shah at saeed.shah@wsj.com