Islamic State remains flush with cash despite setbacks in the past year, holding financial reserves and a range of revenue streams that U.S. and Western security officials warn could pay for a dangerous resurgence.

The extremist organization and its affiliates have assets ranging into the hundreds of millions of dollars across the Middle East and Central Asia, according to the officials and government records reviewed by The Wall Street Journal.

Islamic State’s grip across a large swath of Syria and Iraq was broken last year when a military coalition dismantled its caliphate, cutting off much of its income from oil sales, tax-collection and extortion, and the local banks it had seized.

But the group still extorts local populations in areas it controls or has supporters; receives income from businesses it seized during its rule; and collects payments from human trafficking, U.S. and Western officials say. Its affiliates command a growing share of illicit tobacco markets in Pakistan and Afghanistan, and donors in several Middle Eastern countries work on raising funds, the officials say.

“The underlying conditions that allowed for the rise of ISIS remain,” Marine Gen. Frank  McKenzie, in charge of U.S. Central Command, said last month. “They continue to aspire to regain control of physical terrain. Without sustained pressure, they have the potential to do so in a relatively short period of time.”

President Trump has declared Islamic State defeated and Secretary of State Mike Pompeo said it had been “wiped out.” But the signs of financial strength add to fears among some officials and analysts that Islamic State, at the least, will remain capable of funding attacks for years to come.

The concerns mount as the U.S. moved this month to reduce its military footprint in Iraq and after cutting troops in Syria—areas Islamic State formerly claimed as its caliphate.

Attacks have surged in recent months, and the Defense Intelligence Agency recently has warned that ISIS has fertile ground for regaining lost power. Some U.S. officials are skeptical local authorities can keep the group suppressed.

“The terrorist group remains determined to regroup and inflict violence against Coalition partners and local populations wherever its cells and networks exist around the world,” the multinational Counter ISIS Finance Group, run by the Global Coalition to Defeat ISIS, said last month in a joint statement. “Accordingly, CIFG members have continued their critical efforts to drain ISIS’s resources, disrupt its financial flows, and diminish its resilience.”

The U.S. Treasury Department, a leading member of the finance group, estimates that the group’s reserves could top $300 million. The United Nations in July said the group has at least $100 million. The U.S. and its allies in the last 18 months have sanctioned more than a dozen individuals, businesses and other organizations for financially aiding Islamic State.

Its agents are able to move in and out of Iraq and Syria, using cash couriers, money service businesses and facilitators who set up and run front companies for the group, Treasury said, particularly in Turkey.

“Ultimately, it’s a rural insurgency that lives on peanuts, and it’s got a lot of infrastructure and inventory … already in place,” said Michael Knights of the Washington Institute for Near East Policy, who advises the U.S. government. In Iraq, he said, the group maintains caches of weapons, bombs, motorcycles and other items needed for strikes.

“Each is an insurgency in a box,” he said.

Documents recovered by coalition forces after the fall of ISIS showed the group had been investing hundreds of millions of dollars into legitimate businesses, including hotels and other real estate, advisers to the U.S. government say. Western investigators are working to identify and shut down the businesses through sanctions, but face difficulty in tracing investments back to Islamic State, the advisers say. 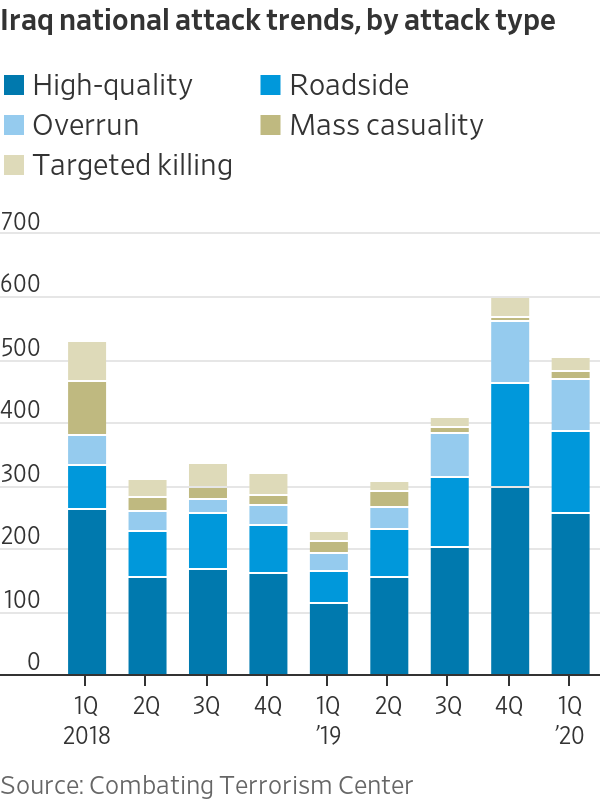 Counterterror officials are examining intelligence suggesting tobacco smuggling is one revenue source, providing a share of a market worth several hundred million dollars a year, according to people familiar with the matter. A key Islamic State ally along the Afghanistan-Pakistan border, Lashkar-e-Islam, is tapping into illicit-tobacco operations throughout the region, according to these people.

Lashkar-e-Islam’s leader, Manghal Bagh, has taken control of many of the cigarette factories in Pakistan’s Khyber Agency, according to an intelligence assessment under review by the U.S. National Counterterrorism Center, referring to the region between Pakistan and Afghanistan, where Islamic State also is gaining a foothold.

Among other sources of financial support, officials from the U.N., the U.S. and the U.K. have been investigating a network of people and businesses hailing from the Iraqi border town of Rawa and suspected of helping finance Islamic State.

Known as “Selselat al-Thahab,” or the Golden Chain, authorities say the network is transferring cash out of former Islamic State strongholds in Eastern Syria to Dubai and through Turkey. The U.N. is considering sanctioning members of the so-called Rawi network, which is already designated in the U.S., according to people familiar with the matter.

Investigators said an Islamic State financial facilitator in Turkey sold facemasks and other personal protective gear through online sites set up in February. Authorities said the facilitator, Murat Çakar, has used other business fronts and cryptocurrency accounts to raise money for ISIS.

“Cryptocurrency is a massive loophole for ISIS and other terrorists,” said Hans-Jakob Schindler, a former U.N. sanctions coordinator. “Unless governments intervene and regulate this sector further, it’s hard if not impossible to detect with certainty ultimate beneficiaries.”

The pandemic also has been used in social media campaigns to raise money for the families of militant fighters living at al-Hol, a large encampment near the Syria-Iraq border, the U.N. said in a report in July. U.S. officials are investigating the fundraising for its ties to human trafficking by Islamic State, including the sale of women as wives, according to officials and counterterrorism experts.

Al-Hol, whose 70,000 refugees represent one of the largest concentrations of current and former Islamic State members, is seen by counterterrorism analysts as a potential base for a resurgence of the militant group.

Islamic State operatives have solicited donations from individuals in the Middle East and Europe, according to officials and counterterrorism analysts, relying on humanitarian appeals. However, donors frequently have been asked to sponsor the costs of helping women, men and children escape from the camps, these people said.

Among Islamic State’s European supporters, “It’s now fashionable to have a wife from al-Hol,” said Vera Mironova, a counterterrorism expert at the Middle East institute who has examined so-called exfiltration networks and has contacts among prospective brides in the al-Hol camp.

Costs of exfiltration range from $10,000 to $35,000, according to the analysts. From al-Hol, many go to Idlib, where key Islamic State leaders now are based, including senior leader Amir Mohammed Abdul Rahman al-Mawli al-Salbi. Islamic State also collects money from ransoms, charging up to $70,000 for a farm owner, analysts said.

Western officials say the money is wired, ending up with “hawala” money changers who use shipping or trading companies as cover, Western officials say. The U.S. Treasury in July blacklisted one suspected financier, Faruq Hamud, accused of being an Islamic State financier running hawala operations in al-Hol.

Can ISIS’s finances be monitored as a way to prevent potential acts of terrorism? Join the conversation below.

Write to Ian Talley at ian.talley@wsj.com and Benoit Faucon at benoit.faucon@wsj.com