Months after Italy’s lockdown against the coronavirus ended, Enrica Grazioli still sanitizes everything that comes into her Milan apartment, wears face masks diligently and limits interactions between her sons and their grandparents.

Ms. Grazioli, a self-proclaimed social butterfly who loves to cook for guests, still hasn’t had friends over for dinner since the virus struck. “Am I overdoing it?” says Ms. Grazioli. “Maybe, but we had a national tragedy of epic proportions and you don’t quickly forget something like that.”

Italy, the first nation outside Asia to suffer a major coronavirus outbreak, had one of the world’s worst death tolls this spring. Overflowing hospitals in parts of northern Italy had to choose which patients got the last intensive-care beds. The Italian army drove truckloads of victims out of the city of Bergamo, which couldn’t cope with the dead.

That shocking experience helps explain why Italy is so far having greater success than many other European countries in limiting the pandemic’s second wave.

Infections in Europe are rebounding partly because millions of people have grown tired of social-distancing rules, mask-wearing and hand-sanitizing, and have relaxed their behavior, health experts said. The public’s fatigue and yearning to get back to normal life are two of the greatest challenges facing governments as they try to keep a lid on infections as winter approaches. 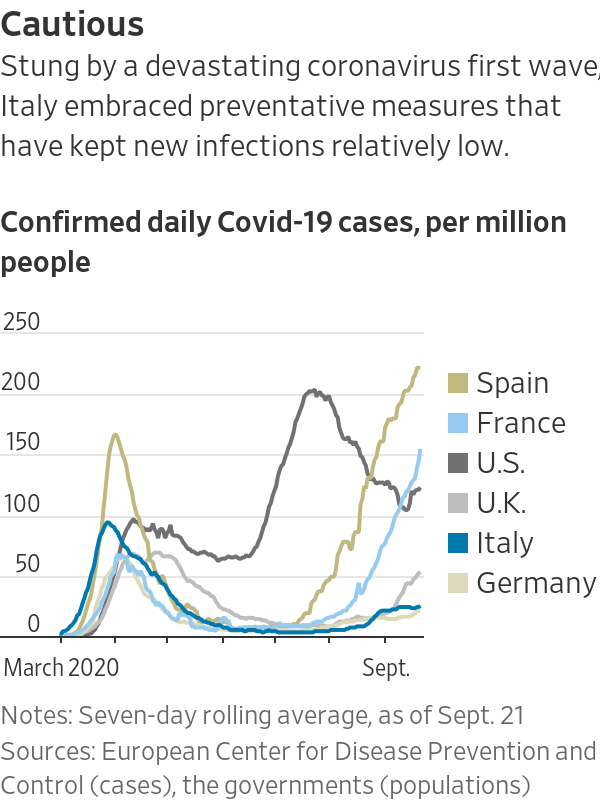 Experts had hoped that mask-wearing and keeping a distance would become everyday habits, at least as long as Covid-19 remains a public-health threat. East Asian societies such as South Korea, Hong Kong or Singapore have been the model for widespread acceptance of such precautions.

That has proved a tougher sell in Western nations with less experience containing viral outbreaks and especially in politically polarized countries where face masks have become another focal point for antiestablishment anger. Protests against mask-wearing and government restrictions have drawn fewer people in Rome than in Berlin or London.﻿

But both Italy’s left-leaning national government and right-leaning opposition, which governs northern Italian regions that were badly hit by the virus, cooperated in containing the worst phase of the pandemic.﻿ Across Italy, masks are mandatory in indoor public places, on public transport and outdoors in crowded areas.

In Italy, the new precautions have become a widespread part of everyday life, more than in many other Western countries. Millions of Italians continue to wear masks outdoors, even when it isn’t obligatory, and carry hand sanitizer.

New habits and a relatively effective test-and-trace regime have helped Italy to limit the rise of infections since August. Increases in Europe have been driven by people traveling on their summer vacations and by more relaxed attitudes among young people who wanted to return to socializing. 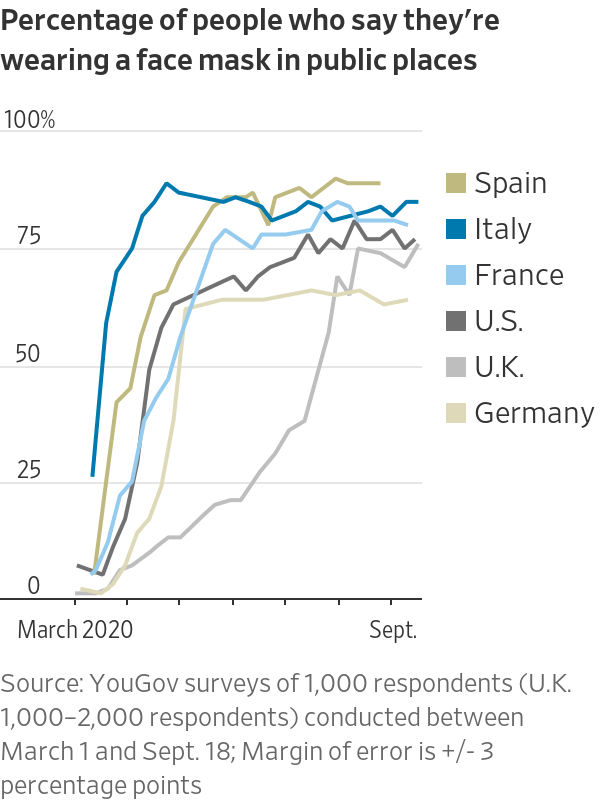 “People were very afraid in March and April and that has an effect on short-term behavior, but it’s not clear how long it will last,” said Guendalina Graffigna, a psychology professor at Milan’s Catholic University. “We’re a Mediterranean country and often we act on our emotions more than in other countries.”

Giovanni Ferrante, a 30-year-old building manager from Rome, is among those who are being extra careful. When he visited his family in southern Italy over the summer, he self-quarantined for two weeks on arrival to avoid potentially infecting them, though it wasn’t required by Italy’s rules and he had no symptoms.

“There is a bit of fear and because of that we behave appropriately,” said Mr. Ferrante, who was walking in central Rome wearing an N95 face mask, which provides more protection than a surgical mask.

Nearby, a bank put up a sign telling clients to stop applying hand sanitizer to its ATM keyboard because it was causing damage.

About 85% of Italians said they wear a mask in public places, more than anywhere else in Europe except for Spain, which is now battling Europe’s biggest outbreak, according to a coronavirus behavior survey by Imperial College London and YouGov. Italians are also more likely to say they avoid crowded public places than most other Europeans, according to the survey, which was updated last week.

It isn’t just about individual behavior. Italy has done a better job than most at detecting infected people through its testing and tracing regime. Over two-thirds of Italians who tested positive for the coronavirus in recent weeks were identified not because they had symptoms, but through contact tracing and widespread screening tests, according to the National Health Institute.

The percentage of tests that come back positive—a measure of whether testing is sufficiently comprehensive—is 2.1% in Italy, higher than it was in June but lower than in most of Europe, according to official data. A low positivity rate indicates that testing is widespread and not restricted to people who show symptoms. The World Health Organization recommends a positivity rate of 5% or less as a condition for reopening.

The percentage of positive tests is lower still in Lombardy, the epicenter of Italy’s pandemic, according to the regional government.

In Spain, by comparison, government data shows 11.9% of tests are positive, suggesting many infections go undetected.

Italian authorities fear infections could rise more strongly as a result of the reopening of schools on Sept. 14, and as fall weather leads Italians to spend more time indoors again. Italy was the first Western country to close its schools and was among the last to reopen them.

Italian schools have reorganized their classrooms to ensure social distancing, sometimes splitting up classes or moving them to other buildings.

In the Milan school attended by Ms. Grazioli’s two sons, some classes are held in the cafeteria, where there is more space, and lunch is served in the classrooms. Face masks are required except when students are seated. There is no interaction between classes, so that if a student tests positive for the virus, their class is quarantined at home, but the school stays open.

Despite the precautions, several classes were quarantined across Italy in the first week after reopening. Administrators at Ms. Grazioli’s school are waiting for test results from several students who turned up with fevers and coughs.

Will Italy’s cautious approach be enough to avoid a resurgence of infections in the fall and winter? Join the conversation below.

As schools reopen and children begin to socialize again, scientists say a priority for Italian families should be to keep the young away from the old. Ilaria Capua, an Italian virologist at the University of Florida, warned that big family dinners—part of the fabric of Italian life—are especially risky.

“Families need to organize themselves differently: grandparents are still vulnerable,” she said. “Intergenerational segregation is key.”

That has placed many Italian parents in a pickle as they manage the interactions between their elderly parents and school-age children. After school hours, many Italian grandparents look after children whose parents are working. Three-generation households are common.

But there are signs that Italy’s grandparents have absorbed the lessons of the pandemic.

“I hear lots of grandparents saying, ‘If you don’t really need me, I think I won’t pick up the children for now,’ ” said Ms. Grazioli. “I still have to see what my parents are comfortable with.”

Young adults are much less attentive to the rules than their parents and grandparents, a problem that came to light this summer as infections surged among people in their 20s and 30s. The generational divide continues in September as balmy weather draws crowds of mask-free 20-somethings to bars and restaurants.

On a recent Saturday evening, Mirko Marin, who works in corporate relations at Milan’s Polytechnic University, headed out to the city’s trendy Navigli canal district for a stroll with his wife and three children. They quickly returned home when they saw the crowds.

“During the day the rules are respected, and then at night the young people suddenly forget what happened in March and April,” said Mr. Marin. “We have to remember so we never live that nightmare again.”

Europe has kept its coronavirus cases low after reopening. Measures like mask wearing have been credited for the early success. WSJ’s Margherita Stancati and Bojan Pancevski explain how sentiments towards mask wearing have changed in Europe. Photo: Claudio Furlan/AP