The U.S. economy in September continued its steady recovery from the sharp declines in the second quarter as demand and output strengthened, according to new business surveys. But the pace faltered in Europe and Asia, where new infections have led to new restrictions on activity.

Data firm IHS Markit said Wednesday its composite Purchasing Managers Index for the U.S.—a measure of activity in the private sector—was 54.4 in September, down slightly from 54.6 in August. A reading above 50.0 indicates that activity is increasing, while a reading below points to a decline in activity.

Growth in the services sector slowed slightly to 54.6 in September from 55 in August, while in the manufacturing sector it accelerated to 53.5 from 53.1.

The numbers suggest the U.S. economy continues its slow and steady climb from the deep declines seen in the spring due to lockdowns and other restrictions imposed to curb the spread of the coronavirus.

“The question now turns to whether the economy’s strong performance can be sustained into the fourth quarter,” said Chris Williamson, chief business economist at IHS Markit.

Coronavirus infection rates remain high in the U.S., and mounting uncertainty over the presidential election could further tamp down business optimism, he said.

The recovery has been slower in other parts of the world.

Surveys of purchasing managers in France, Germany and Japan pointed to a decline in activity at businesses that provide services during September, an indication that the global economy may struggle to return to pre-pandemic levels of output until a vaccine becomes widely available. 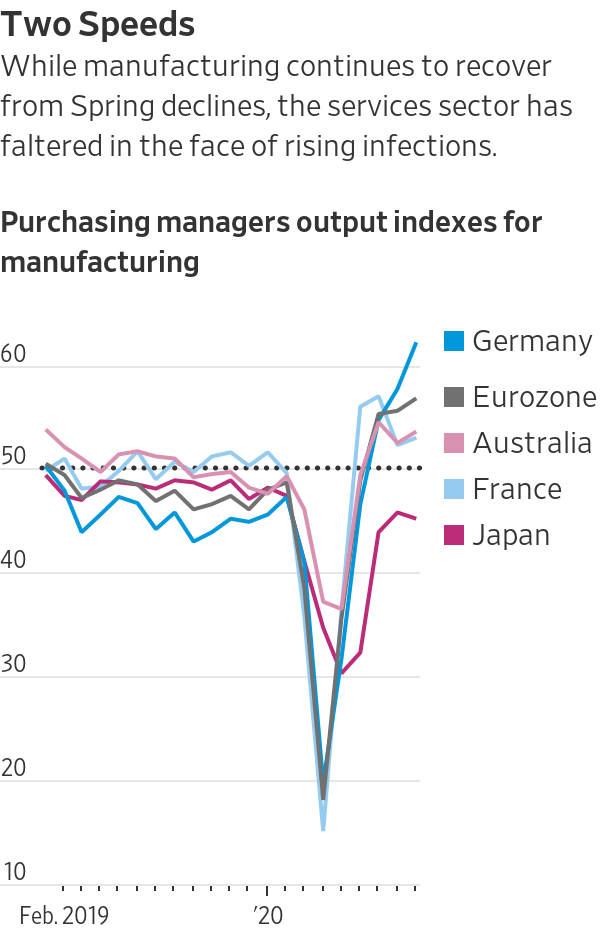 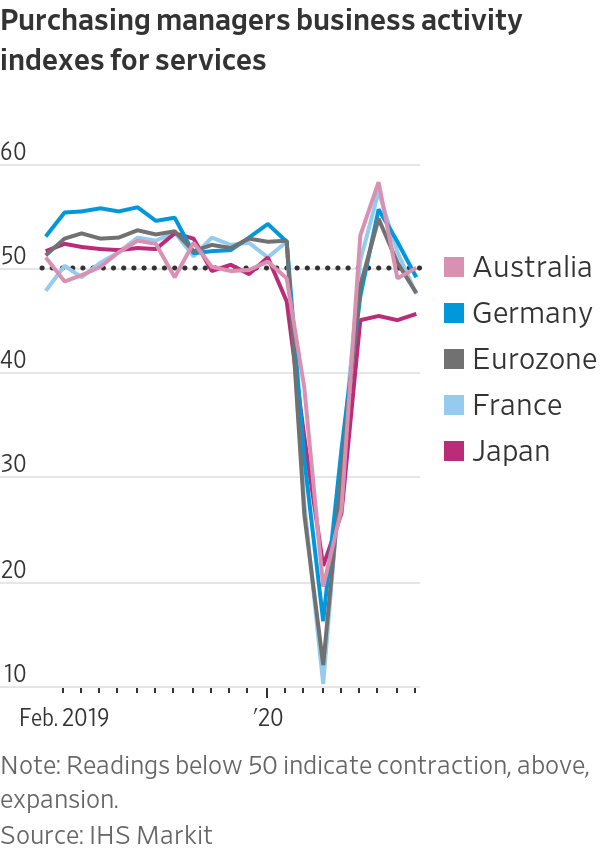 The surveys indicate a faltering end to the third quarter, which saw the recovery of much of the output lost to strict lockdowns. The weakening of services activity comes as a number of European countries, including the U.K., France, Spain and the Netherlands, have tightened restrictions in response to accelerating infection rates.

Within Europe, the contrast between Germany’s export-reliant manufacturers and France’s domestic-facing service providers was stark. Germany’s PMI for manufacturing surged to 56.6 from 52.2 as exports helped drive new orders to their largest monthly rise in a decade. But in France, the services PMI plunged to 47.5 from 51.5, as daily infections hit 10,000.

The divergence between the sectors was less pronounced in Japan and Australia, but the former remained the weaker of the two. According to purchasing managers, services activity continued to decline in Japan, and stagnated in Australia.

Despite the setback for services in September, economists expect the third quarter to see a strong rise in economic output, as countries around the world regain much of the ground lost in the three months through June. Last week, the Organization for Economic Cooperation and Development lowered its estimate for the size of the global economic contraction in 2020 to 4.5% from 6%.

Central bankers have taken a similar view but have warned that the outlook very much depends on the course of the pandemic.

Earlier in September, European Central Bank President Christine Lagarde sounded an upbeat note about the eurozone’s progress but noted that the services sector had begun to falter in August. September’s surveys of purchasing managers will likely heighten the central bank’s concerns, and make a further round of stimulus before the end of this year more likely.

“The recovery is under more pressure than previously thought,” said Bert Colijn, an ING Bank economist. “For governments and the European Central Bank, this will be a wake-up call, if they needed one.”

Write to Paul Hannon at paul.hannon@wsj.com